Listen to a complete audio recording of the “Church and China” panel.

A chat with a stranger in 2004 gave Notre Dame scholar John Lindblom his first experience with China’s Catholic house churches, sometimes referred to as “underground” churches.

Lindblom, currently a theology doctoral candidate studying Christianity in China, lived in Chengdu at the time and attended an official Catholic church there. He met the man in Beijing at a religious site.

“He had really gone through the suffering that you hear both from underground Catholics and official church Catholics,” Lindblom said. Fourteen members of the man’s family—including a brother who was a priest—were killed by communists in the 1950s.

Struck by the stranger’s story, Lindblom accepted an invitation to attend an unofficial Mass. Surprisingly, nothing about the venue, service, or congregants’ demeanor felt as if they were hiding or “underground,” as is commonly perceived. Instead, services were held outdoors.

At a later visit to a different house church, Lindblom saw Catholics from both official and house churches celebrating Mass together along with their respective priests. “They were rebuilding a church with the intention of sharing it together,” he said.

As time went on, Lindblom realized that common portrayals of tension or animosity between house churches and the official church were largely incorrect. Instead, he saw commonalities and shared suffering between two parts of a single church operating under the complexities of an authoritarian government.

Lindblom shared his experience during a panel discussion titled “The Church and China in the Age of Francis” on April 26 at the Keough School of Global Affairs. The lunchtime event drew a capacity crowd of 70 and was sponsored by the Liu Institute for Asia and Asian Studies, the University of Notre Dame Press, and Notre Dame’s Institute for Advanced Study.

The panel was organized to offer insight as Pope Francis is said to be considering an agreement with Beijing that would allow the Chinese government to play a larger role in appointing Catholic bishops.

While media reports emphasize divisions between house churches and the official state church, or paint house churches as the “true” church, panelists agreed that these reports often don’t give a wide enough view of the truth.

MORE TO THE STORY 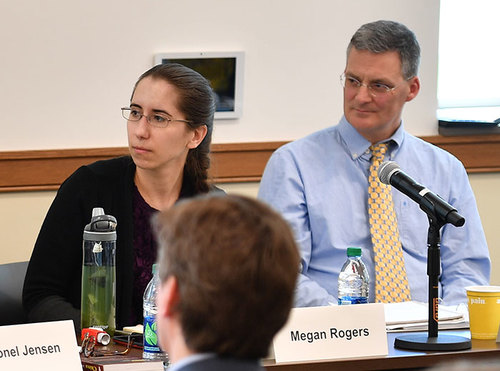 Rogers opened the discussion by emphasizing there is more to religion in China than the popular themes of government control, government oppression, and a rising number of converts to Christianity.

“These three topics have truth, but they’re not the whole story,” she explained. “And they don’t tell a lot about the ordinary religious experience in China.”

Instead, many elements of religion in China aren’t widely understood. For instance, the communist government isn’t the first to control religion in China, but followed a precedent of past governments, Rogers said. The PRC recognizes five religions—Buddhism, Catholicism, Islam, Protestantism, and Taoism. As a result of this recognition, the government can officially provide endorsements and incentives, including funding to help build churches and to supplement income for religious leaders, she said.

Additionally, news reports that portray religious repression as happening nationwide under a central government are not correct. The truth is that local governments are the dominant forces that jail practitioners or destroy churches, Rogers said.

Finally, while the news about the “divided” Catholic church in China has commanded attention worldwide, the truth is that “Catholics are not even on people’s radar in China,” Rogers said. Ordinary Chinese people don’t even know a Catholic person or know about the issue of the Church and China.”

A TREE THAT BLOCKS THE FOREST

Instead of focusing solely on bishop selection, Chambon pointed out changes in China’s Catholic church that should not be overlooked: “We should not miss the forest because of one tree,” he said.

He identified three significant forces that are changing the church in China: urbanization, the changing role of Catholic sisters, and the rising importance of pilgrimage.

The rapid movement of Chinese people from countryside to city has created “gigantic social transformation,” Chambon explained. For example, migrants are building chapels and other places of worship that don’t require official authorization or blessings the way churches do.

Additionally, the role of sisters is changing largely because seminaries are struggling and even closing. This allows sisters, who have become better educated throughout the years, to claim greater leadership roles. “They don’t want to be dictated to by priests,” Chambon said.

Finally, Catholics are repairing or creating pilgrimage sites, which have begun to serve a significant role in Catholic religious life in China. In this sense, Chinese Catholics are more in line with European Catholics, who value pilgrimage more than American Catholics do. 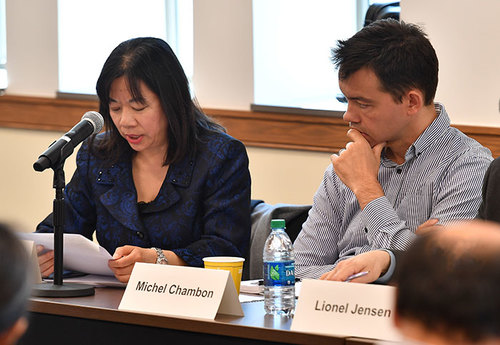 Lu expressed concern about how the complexities and challenges of the state of the church are affecting the spiritual lives of Chinese Catholics—another issue that is commonly disregarded.

First, she pointed out the need to ensure priests receive adequate and relevant training, even as seminaries shut down in China because of lack of demand. “The new generations of Catholics are well-educated and they need spiritual food that’s of high quality,” Lu said.

Second, she asked how the church can address spiritual needs in a society that is “rapidly changing and increasingly materialist, fractured, and polarized.”

“How can the church itself become a model for how to disagree in charity? How [can it show how] to link with religious others in a pluralist society with an ecumenical and interfaith spirit?” she asked.

Finally, “How can [the church] become a field hospital?” she asked, referring to a 2013 quote from Pope Francis in which he says the church, in order to heal wounds, must become like “a field hospital after battle.” 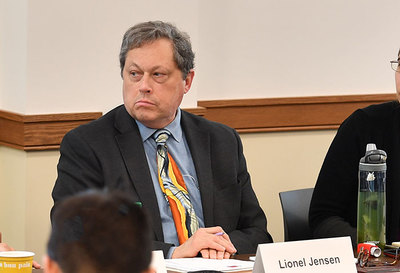 In a question and answer session following the discussion, Jensen circled back to the impetus for the panel discussion: a potential agreement between the Vatican and Beijing in selecting bishops. He urged people not to jump to conclusions or to assume any deals are done.

“There are some known unknowns,” he emphasized. “The first is there are ongoing discussions between the Vatican and Beijing—that [fact] we are aware of. We don’t know what’s happening. No one really knows. So it means that the status of the underground churches … is something which is in the offing. We don’t know much about what might happen.”

With this in mind, it is important not to speculate or jump to conclusions about discussions “because it can really inflame a certain level of misunderstanding,” Jensen said.

And, as all of the panel members had revealed, too much misunderstanding already exists about the realities and challenges of the Catholic church in China.

Listen to a complete audio recording of the “Church and China” panel.

Originally published by Christine Cox at asia.nd.edu on May 15, 2018.