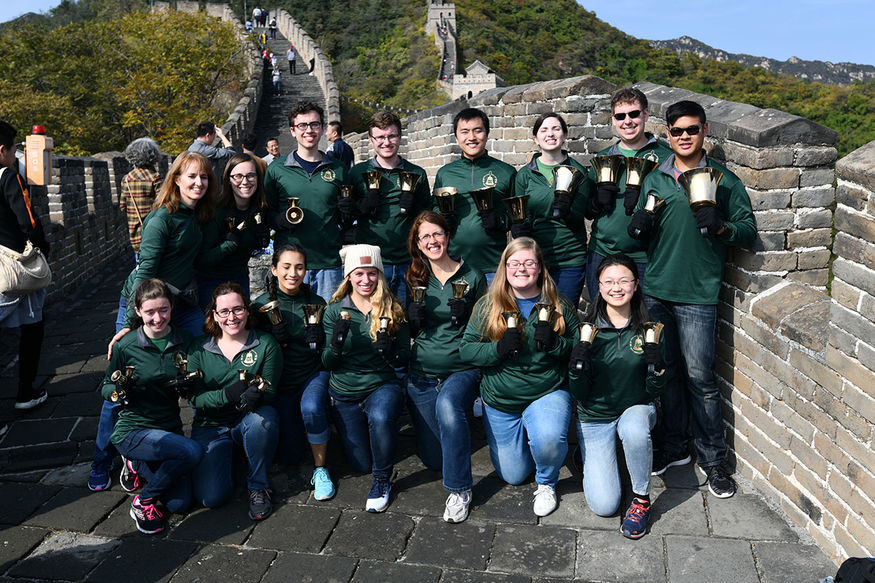 At the snowy beginning of the new year, reflecting upon the past year, the ringers in the Notre Dame Handbell Choir would agree the most rewarding and unforgettable experience for them in 2017 would be the China Tour over the Fall break.

During the 11-day trip, the Handbell Choir, led by the director Karen Schneider-Kirner, Miranda Ma from ND International, and Brett Perkins from Campus Ministry, traveled over 13,000 miles  to Beijing and Chengdu, performed at 12 concerts and masses with approximately 180 music collaborators, and reached a total audience of 3,000. The Choir was warmly hosted and welcomed by the Notre Dame Beijing Global Gateway, Peking University, Sichuan University, South Cathedral in Beijing, Ping’an Qiao Cathedral in Chengdu, Daystar Academy, as well as the Notre Dame community in the two cities. 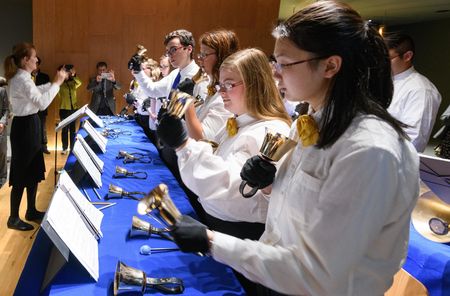 The Handbell Choir China Tour originated from an idea of  Dr. Jonathan Noble, Assistant Provost for Asia and Director of the Beijing Global Gateway, about inviting the choir to perform at the inauguration of the Beijing Global Gateway. A wonderful dialogue on what it means to build future communities, the choir playing and singing the Alma Mater and other pieces, as well as a prayer led by Brett Perkins, made for a great event.

Ringing handbells on the Great Wall was definitely a once in a lifetime experience. Nicole Lukesh ’21 and Julia Erdlen’18 reminisced, “We packed bells in backpacks and lugged them up many stairs, before ringing with the least gear we have ever used. Playing on the top of the Great Wall feels like on the top of the world. It was one of those surreal, indescribable moments where I need to re-watch the videos and look at the pictures again to make sure it actually happened. ”

The choir had a beautiful joint concert at Peking University. The choir collaborated with the university’s Chinese Music Institute and Singsong A Cappella on two Chinese music pieces and the Alma Mater of both universities. “One of my favorite memories is the joint concert with Peking University. It was challenging in many ways, but I grew stronger and more hopeful about myself from the experience.” said Wenbo Li, a ringer and a Ph.D. student in Economics at Notre Dame, “I almost lost faith if we would be able to perform the Colorful Clouds Chasing the Moon due to its level of difficulty, but the choir eventually conquered the piece in a way I never imagined. ”

Thanks to the invitation and support from Dr. Shijing Yan, Vice President for International Affairs, at Sichuan University, the choir traveled to Chengdu and performed two concerts at both of the university’s campuses. Matthew Fabian and Bettany Kokotajlo, co-presidents of the choir described their experience this way, “At Sichuan University, it was wonderful to interact and work with their students. Everyone was so hospitable and truly welcomed us to their school. The staff who assisted with sound, lighting, and background video were extremely professional. The programs and publicity were of the highest standards, and we truly felt like honored guests!” Dr. Yan described the concerts as “couldn’t be more perfect” and extended a second invitation for the choir to return in three years for the dedication of the university’s new performing arts facility. 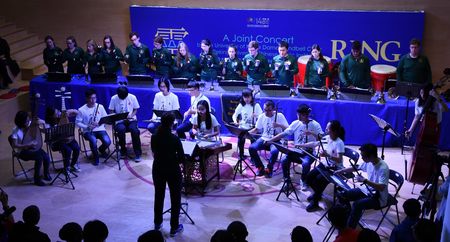 It was a fantastic opportunity to join the Catholic community in China and celebrate our shared faith. The choir had the opportunity to collaborate with choirs from the North Cathedral and the South Cathedral in Beijing, and the musicians from the Ping’an Qiao Cathedral in Chengdu. “One of my favorite experiences was when we arrived in the Cathedral in Chengdu and there was a group of Chinese Catholic Christians who were singing and praying in the church.” recalled Brett Perkins, “It was such a wonderful reminder to me that Catholicism is truly universal, in all places and for all people, and that the Catholic faith is lived out just as vibrantly by the faithful there as it is back here at home.”

When asked about the favorite moment of the trip, Karen Schneider-Kirner, Director of the Handbell Choir said, “Anytime we collaborated with other musicians was a highlight for me. Witnessing the joy and smiles our music brought people who were hearing a bell ensemble for the first time will stay with me forever. Having the opportunity to dialogue with Catholic priests in China and learn about practicing your faith in China was such a gift. Overall, I was really proud of how our students represented not only Notre Dame, but also our country.”

“The Notre Dame Handbell Choir China Tour would not have been so successful without the University’s internationalization strategy, and the deep commitment in Asia in the past decade.” said Miranda Ma, Advisor for Asia Programs, “It took an enormous amount of effort to plan for this amazing adventure, but what really turned all the ideas into reality are the strong partnerships the Beijing Global Gateway and ND International have established in China over the years. Whether it was meeting with the leadership of our partner universities, or being taken to a delicious feast by ND parents, there were many moments on the trip when we felt truly proud to be part of Notre Dame.”

Originally published by Miranda Ma at international.nd.edu on January 18, 2018.