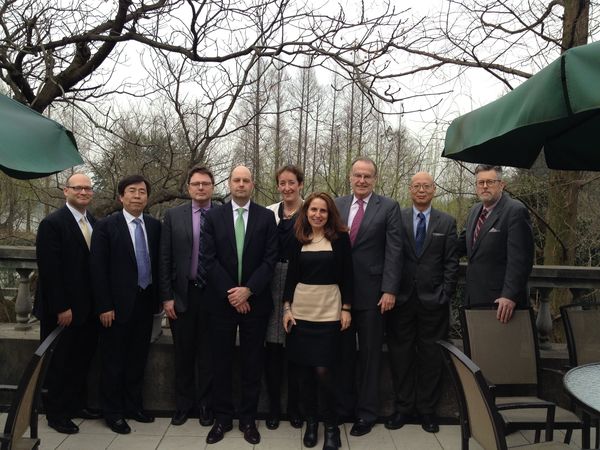 The delegation’s objective was to help evaluate Notre Dame’s opportunity to develop a joint liberal arts college with Zhejiang University. Towards this goal, the delegation met with administrators and faculty of other Sino-American and Sino-British higher education partnerships and programs, including NYU Shanghai, Duke Kunshan, the University of Nottingham Ningbo, and the Harvard Shanghai Center.

The delegation toured Hangzhou and Shanghai and attended Mass at Saint Joseph’s Church in Shanghai, where they met with Catholic priests and academics. This delegation followed a January 2015 visit to China by President John I. Jenkins, C.S.C., and Provost Thomas G. Burish, who met with Chinese university, Church, and government leaders.

Reflecting on the trip, Hildegund Müller, Associate Professor of Classics, said, “I was very impressed by the academic environment we encountered at ZJU. The meeting with Catholic clergy made a deep impression on me. From my very limited experience, China strikes me as a country of great complexity and great opportunities, and we should not be ignoring the latter because of the former.”

Further faculty discussions on the proposed collaboration will be organized within the relevant colleges and will include members of the ND-ZJU Faculty Curriculum Committee.