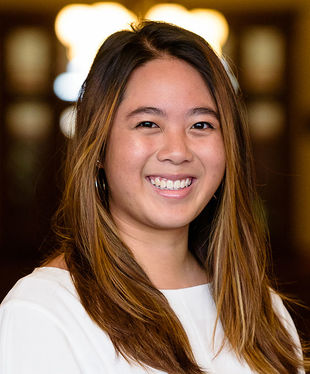 As a former Physics major and current Computer Science major, with intended minors in Collaborative Innovation and the Glynn Family Honors Program, my journey at Notre Dame has taken me down many unexpectedly delightful paths.

Growing up in major cities around Asia exposed me to various cultures, viewpoints and experiences, as such, I speak English, German, French, Cantonese and Mandarin. In high school, I was elected Head Prefect by the faculty during my senior year. I captained the underwater robotics team and competed twice in the HK Regionals of the IET MATE International ROV Competition. Additionally, I was the Alto Section Leader of the GSIS Vocalis Chamber choir. I also played ball hockey and basketball, even coaching the junior basketball team my final three years.

At Notre Dame, I devote my time to Notre Dame’s Army ROTC Fighting Irish Battalion, where I am a part of the Colour Guard, Running Club, Sorin Rifle Team, and ATLAS service club. Through this program, I have further developed my leadership, discipline, and teamwork. Additionally, I am a Junior Physics Editor for Scientia, Notre Dame’s student-run undergraduate research journal, and work as a Basketball Official for Recsports. This spring, I will also be a part of Notre Dame’s Show Some Skin production.

Last summer, I spent eight weeks volunteering at the Naankuse Wildlife Foundation, a wildlife conservation NGO in Namibia. Whilst there, I took care of rescue animals, and assisted with Naankuse’s research on human-wildlife conflict mitigation, which aims to influence government policy. Wildlife conservation is a cause is dear to my heart; therefore, upon my return to ND, I decided to partake in the C-Prize competition, where our team placed within the top ten. My idea culminated in the form of Pawprint – a carnivore tracking app that helps researchers locate these endangered animals; we are currently looking to further this project on our own.

Notre Dame is a place like none other, with a community that fosters a stimulating and balanced learning environment. I am incredibly grateful for all the opportunities that Notre Dame and the Greater China Scholars community has provided me with and I intend to make the most of them throughout the next two and a half years.

I am a sophomore at the University of Notre Dame majoring in Philosophy. I also have a supplementary major in Classics, with a Greek concentration.

In high school, I joined the discussion group of Plato’s works. Three years of successive reading intrigued my interests in philosophy and ancient Greek civilization, which later determined my major in college. In the spring semester of junior year I plan to study abroad in Athens. During high school, I also joined the campus newspaper club, investigated the cultural inheritance value of the gradually disappearing physical bookstores, organized lectures for students, conducted an independent investigation on the unbalanced educational resources in rural and urban areas, and founded a platform for recycling and co-sharing idle resources within campus.

In summer 2019, I joined the NGO “Da Shan Xiao Ai” as a summer camp advisor for underprivileged students in Guizhou, China. I gained first-hand knowledge about the current situation of educational NGOs and the difficulties they are facing. The amazing people I met there empowered me. In the future, I hope to learn as much as I can in ND’s philosophy department and explore how the media that can bridge philosophy with our everyday life.

At Notre Dame, I major in history and minor in Philosophy, Politics, and Economics (PPE) as well as German. It is my utmost interest to decipher the enchanting myths of diverse human civilizations. I am fascinated by how ancient people lived their lives, how different cultures interacted and synthesized into new flourishing styles, and how human species strive to pursue happiness and truths.

In high school, I served as president of the student government and was the founder of Yuanpei academic forum. I directed and led in the play “Audience that Are Bound” and performed in Nanyang High School in Singapore. I founded the team “Bookstore Travelers” to survey the significance of bookstores and advocated for cultural preservation.

In college, I aspire to further my interests in humanities and to foster cross-cultural understanding. I benefit greatly from the courses offered by the Glynn Family Honors Program. I’ve joined the Kellogg International Scholars Program and gained new insights into international development. I am doing research with professor Liang Cai from history department on Confucianism and ancient Chinese legal system. Last summer, supported by the GCS summer enrichment award, I participated in the German Immersion Program to study German in Berlin for 8 weeks, which is a transformative experience that provided me with not only language skills but also trans-cultural literacy. Aside from the academic growth, I work as a Chinese language tutor at the Center for Language and Cultures (CSLC) and serve as a board member at Chinese Culture Society. I served as a table leader at 2019’s AAA First Year Retreat and performed Chinese dances at Asian Allure talent show.

In my junior year, I will study history at New College, Oxford University to further cultivate my passion in humanities. I wish to make the best out of my four years and work hard towards my goal of becoming a historian and a humanist. 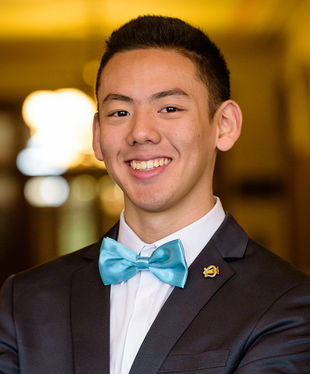 I am a native of Taipei, Taiwan studying Music and Biochemistry.

Prior to commencing undergraduate studies, I found joy in music performance, volunteering, athletics, and scientific research. I have been playing the violin and viola for 16 years, piano for 10. Over four summers, I served as a English language instructor in Tainan, Taiwan. I also represented my high school on our rugby, basketball, and cross-country running teams. In the summer of 2017, I worked in Shin-Hong Shiao, Ph.D's laboratory at National Taiwan University School of Medicine (NTUCM).

I was very active in music during my first year at ND as a performer, teacher, and advocate. Aside from performances within the Department of Music, I was frequently hired to play for Sacred Music at Notre Dame, Opera Notre Dame, and private events. I also led the viola section of the Notre Dame Symphony Orchestra, and presented my peers' compositions with the Composer's Consortium. As a teacher, I gave weekly violin lessons to a young beginning student through the MusicLink Foundation. As programmer and host for WSND-FM, I regularly shared musical works in the classical style by non-male, non-white composers. In the spring of 2019, I joined Neil F. Lobo, Ph.D's group, studying Anopheles mosquito population dynamics.

The summer following, I spent six weeks in Berlin, Germany on intensive German language study. I also speak Mandarin and Spanish. For July, I was invited to attend the Zephyr International Chamber Music Course and Festival in Courmayeur, Italy, earning scholarships from both the festival and our Department of Music.

I am currently spending a year away from campus to enrich my academic capacities and discern my interests. I have been working in Shin-Hong Shiao, Ph.D's laboratory at NTUCM since September 2019, where I collaborate with our Ph.D student on a study of dengue and Ziko virus dissemination in the Aedes aegypti mosquito. I also assist in experimental surgery workshops at National Taiwan University Hospital; in October 2019, I obtained certification to conduct small-size animal surgery. Research aside, I am undertaking intensive self-study in the German language, music composition, calculus, and formal logic.

I am currently a sophomore and a proud Valkyrie of Pangborn Hall, though I will move to the newly constructed Johnson Family Hall next year. Though I am from Watertown, Massachusetts, I spent roughly half of my life, including high school, in Shanghai, China. I am currently majoring in Political Science and International Economics with Japanese.

Over the past year at Notre Dame, I have engaged in various activities and commitments in a variety of fields. Throughout the past year, I worked as a research assistant with Professor Katie Jarvis from the History department on her newest publication, focused on the concept of justice in the time of the French Revolution. This past summer, I utilized my GCS funding to participate in an intensive language study abroad in Hakodate, Japan, improving my Japanese language skills and developing a closer relationship with Japanese culture. Outside of academics, I serve as the secretary of the Notre Dame Japan Club, and I am also involved in dorm life as Pangborn’s Gender Relations commissioner.

Next summer, I plan on either participating in an internship or doing volunteer work while researching a topic of my interest. 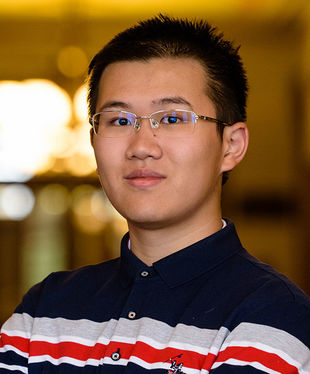 I am Tianyi Wang from Nanjing Foreign Language School. I’m currently a sophomore in Dunne majoring in physics and philosophy.

Throughout my freshman year, I actively explored the field of particle physics and philosophy. As a member of professor Kevin Lannon’s research group, I conducted studies and benchmarks about the efficiency of geometric corrections as part of the upgrading track finding algorithm for Compact Muon Solenoid (CMS) at CERN. I also gained strong interest about the role of philosophy in the development of scientific research and experienced several courses in the concentration of philosophy, science, and math.

Last summer I joined the physics Research Experience for Undergraduates (REU) program at Notre Dame. I served as a research assistant under the guidance of professor Lannon and Hildreth. That was my first full time research experience. I gained enormously precious skill of exploring unfamiliar topics via independent research and collaboration with colleagues. I also made several good friends with similar academic interest and further confirmed my aspiration in physics.

I’m also an active member of Notre Dame Rocketry Team (NDRT). We work on modeling, building, testing, and eventually launching a rocket with self-control system and UAV payloads for NASA’s student rocket launch competition. I really enjoy the chance to apply my knowledge to hands-on experience and have fun with my good friends.

Currently I’m planning to also explore the field of astro-nuclear physics before finally deciding my interest of concentration. I’m also looking forward to the Geneva study abroad program in the spring semester of my junior year, which will allow me to immerse in a different, French-based learning environment and conduct further research at CERN. 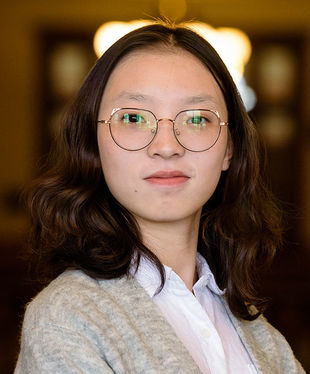 I am a proud Flaherty bear from Guangzhou, China. I double major in biological sciences and applied computational math and statistics (supplementary major), but I am also interested in Japanese.

I am extremely honored to be a member of the Notre Dame community. During my exploration in the first year, I identified my interest in computational biology. Last year, I conducted researches on protein interactions in ESX-1, an important system in Mycobacteria virulence. In the past summer, I joined Dr. Mary Ann McDowell’s lab, where I investigated sandfly gene markers related to age. Last semester, I also participated in the research that examined a mutant gene causing blindness in fruit flies. I will continue to improve my research ability and accumulate experience to better adapt to my future career.

Besides academics, I enjoy cooking for my friends in my free time. I’m eager to bring the wonderful food culture in Guangzhou to Notre Dame. 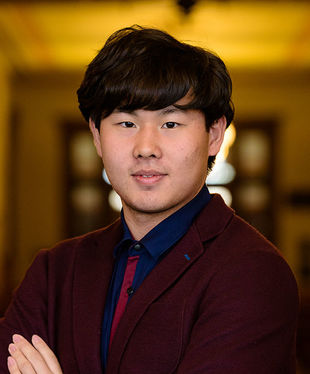 I am a knight from Keenan Hall. My major is computer science with mathematics as a supplement.

After a year’s exploration in Notre Dame, I decided to continue my studies in computer science and mathematics. During my freshman year, I joined the CS for Good team where we built a medicine and supply inventory system for the Moore Pediatric Surgery Center in Guatemala.

Since spring 2019, I have started doing research with Prof. Kevin Bowyer and Dr. Vitor Albiero. We focused on the gender prediction accuracy difference across demographics.

In the summer after my freshman year, I worked as a research assistant in the Notre Dame CVRL, analyzing the gender inequality in face recognition accuracy.

In my sophomore year, we presented a method to curate training dataset for accuracy testing purpose.

I established the Notre Dame badminton club with friends.